Saturday night, I went to the Emergency Room because I had pain in my armpit, arm, wrist, fingers, and shoulder, all on my left side. No other symptoms. The ER staff asked me a million questions.

Shortness of breath? No.
Tingling? No.
Have you hurt your arm in any way? Any accidents? No.
Rapid heartbeat? Sweating? No.

So, they gave me what they call a GI cocktail, which is basically a very high powered cup of gunk that smells like Aquanet and Pepto Bismol. It did NOTHING…because my stomach didn’t hurt. Duh.

Next thing ya know, there’s a nurse coming into my little curtained off room in the ER with a needle. He looks at me and asks, “So, do you want some morphine?” Seriously, it was up to me. The question caught me off guard. After I told him no, I did not want morphine, I was told to bend over. I got a shot in my hip. I have no idea what it was they gave me, but it made the pain in my arm stop a little bit.

But, that pain was immediately replaced by another one–the pain of having a needle rammed into my hip. It didn’t hurt when he did it, it hurt afterward. I got an IV, which was then used to push dye through my veins for a test to see if I had a blood clot. No blood clot in my lungs or anywhere else. They had no idea what to do with me. So, of course, I was admitted because if they see a fatty who smokes with any sort of pain on the left side, they assume heart attack. I won’t complain there. It’s best to cover all your bases.

Unfortunately, by that time, my blood pressure was starting to get dangerously low because I have naturally low blood pressure anyway and it was the middle of the night. I hadn’t eaten or had anything to drink other than some bottled water, which cost my husband $2.75 in a vending machine. That water must have come from a magic spring in Narnia.

After my husband left and I was in a room, nurses and other staff began to torture me. I was immediately given blood thinners by way of a shot in my belly. It hurt. A lot. And, then a nurse came in with a medicine cart and took my vitals. She says, “Hmm, your blood pressure is kinda low.” So, then I explain to her that it’s always low. My top number never reaches 100. If it does, my bp is actually high.

She then proceeds to toss some pills in a cup and hands them to me. I asked what they were and she said they were beta blockers. I asked what those do and she explains its for anyone on the cardiac floor and they help keep your blood pressure down.

Now, I’m no doctor, but if you already have low blood pressure, why in the name of Hades would you take beta blockers to make it even lower? I refused the beta blockers. I didn’t feel like being in a coma that night.

I spent forever in that hospital room doing nothing. They kept taking blood (at least three times every day) and I was put on a cardiac diet, which basically means your food is all boiled and steamed and you’re not allowed to have a lot of sugars or sauces–no gravies, no mayonnaise, no salt. I actually don’t mind bland foods and I’m a big fan of black pepper (which they gave us plenty of), but I have low sodium. My sodium levels sometimes get dangerously low if I’m not taking in enough salt. Of course, they wouldn’t take me off the cardiac diet because I was on the cardiac floor and awaiting results from a miserable stress test. Unfortunately, my sodium levels slowly began to plummet. I’m the exception to the rule (for fatties who smoke). My blood pressure and sodium levels are always low. So, I began to weaken and I began to get fidgety from the lack of salt.

By the end of my stay, I had a blown out vein, my belly was black and blue from blood thinners, and I refused to take any more of them until they released me. My stress test came out fine. No heart problems, no blockages. Everything looked good and I was released with no clue what’s wrong with my arm. That being said, the cardiologist did say it looked like bursitis to him, which makes sense…my dad gets bursitis from time to time and he and I are both people who work a lot with our hands and arms.

As soon as I was released, my husband took me to McDonalds (which I hate) and bought the most sodium filled food for me that he could think of–french fries. It did the trick. I slowly began to feel like myself again. 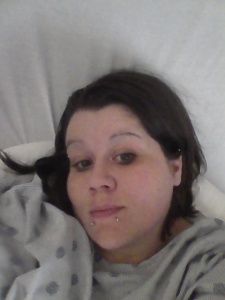 Moral of this story? Hospital stays suck and I’m so glad to be home.