In case you’ve been living under a rock, West Virginia has been out of school statewide since Thursday due to a teacher strike. I’m not going to explain why the teachers are striking, but it made the national news and I’m just going to share some links for you instead.

So, if you’re in West Virginia and you have a houseful of antsy kids, I’ve given some thought to what you can do with your kids to have some fun and pass the time. My kids have been driving each other (and me) crazy with boredom and I don’t blame them. There has been some rain and mud issues, so going outside is a touch and go thing.

I promise you folks eating low or lower carb is a lot easier than you might think, but I understand why people shy away from the idea. Learning a new way to eat is overwhelming, but it doesn’t have to be. Most of us just overthink things. To simplify your life a smidge, here is a good starting off list of things you might like to pick up at the grocery store to give you the push you might need and help you get an idea of what you can have. And, you can have more than you might think.

PRODUCE:
Lettuce
Tomatoes
Cabbage
Cauliflower
Brocolli
Zuchini/Squashes (Our local store now has pre-packaged zuchini noodles, which are worth their weight in gold.)

DAIRY:
Almond milk, unsweetened
Heavy whipping cream
Block, shredded, or sliced cheeses of your choice
Cream Cheese
Eggs (Lots and lots of eggs)
Sour Cream (or light sour cream, if you wish)
butter (or light butter, which is what I prefer)

MEATS/FROZEN FOODS:
Chicken (breasts are versatile, but you can buy any bone-in cut you like, too)
Bacon or turkey bacon (I eat turkey bacon more than regular, but I’m probably the only one lol)
Sausage or turkey sausage
Steaks, ground beef, and any other chops or cuts of anything you like.
Frozen berries
Frozen brocolli or other low carb veggies (Spinach is awesome to have on hand)
Frozen riced cauliflower

**Watch out for special sausages (like polish sausages and hot dog weenies) because they tend to be high in calories and sodium, so if you’re watching those things, too, be mindful when meal planning and shopping.**

CANNED/PANTRY ITEMS:
Taco sauce/salsa
Canned chicken
Adkins Protein Shakes (if you don’t get enough protein in your diet…like me…these are great as an end of the day treat).
Peanut butter or other nut butters
Nuts (just watch for special flavors, plain or salted is best)
Stevia or other sugar substitutes (Stevia is my favorite)
Sugar free jello and pudding mixes
Powerade Zero, any flavors you like. Red is my go to.
Almond and/or coconut flours (these are expensive, so I don’t use them often, but I added them because a lot of Keto/low-carb eaters do)
Sugar Free candies, jams, and jellies (READ the labels.Not all of them are low-carb friendly, but most are)
Bottled waters

EASY MEAL IDEAS:
1. Taco salad, minus the chips! You can have just about anything you might put in a taco salad and it’s one of my favorite things.
2. Baked egg cups — Cut up a few bell peppers (any color, but a minimum amount because they’re carby lol), some mushrooms, some spinach (fresh or frozen) and even, if you like, cooked ground sausage or chopped bacon. Toss it into a bowl with about 8 large, whisked eggs. Stir together and pour into greased cupcake tins. It’ll make about a dozen. Bake on 350 until done. If you like, you can add a little bit of shredded cheddar to the top. These are about 80-90 calories and carbs depend on what you put in them, but usually no more than 1 or 2 net carbs (usually less).
3. Zuchini noodles with basically anything. Toss some olive oil in a frying pan and heat on medium. Toss in a handful of (optional) onions if you don’t mind a few extra carbs and honestly a few tiny bits of onion won’t hurt, but add a lot of flavor. Cook the onions until they’re translucent. Add zuchini noodles and whirl them around a bit while they cook. From here, you can add in your favorite homemade or store bought spaghetti sauce or alfredo sauce.
4. OR, you can make a stir fry instead (in which you would use a wok or high sided pan and cook the noodles with the other veggies in the stir fry, using the zoodles in place of noodles. For a stir fry, you could also make fried rice with riced cauliflower. It’s seriously good.

EASY SNACKS:
1. Strawberries and whipped cream (I make my own and use stevia instead of sugar).
2. 1/4 cup of nuts
3. An ounce of cheese
4. Brocolli/Cauliflower and 2 tbsp. ranch dressing for dipping.
5. Lunch meat roll ups — Any sandwhich meat you like, spread a thin layer of cream cheese on top, place a sliver of a pickel in the middle. Roll up, eat. Delicious. 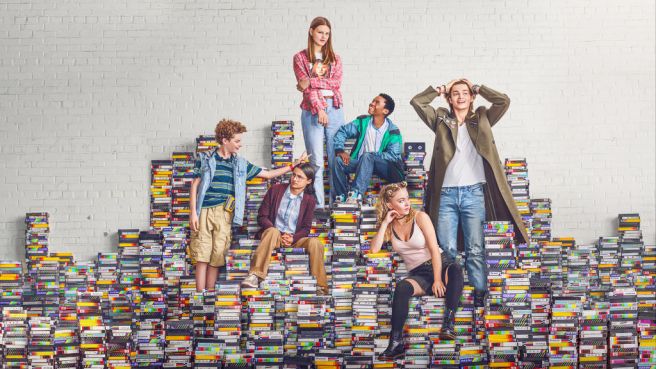 For the past few days, I’ve been watching Everything Sucks on Netflix. Let me start by just telling you that I was not ready for the multitude of trips down memory lane I’d take by the time I made it to the last episode. Seriously, I should have packed a suitcase and a hatbox. It was bananas how great it was to see kids on a television show from my day. I do believe it’s my new favorite thing.

Let’s just remember that when I was a kid, I wasn’t nailed down to one place. We moved often (every few years, really) and I hated to make friends knowing it was completely possible I’d only be their friend a short handful of months. Realistically, I knew it was a good idea to keep a few pals around because loneliness isn’t my thing. So, I made a few friends here and there. And a lot of them are still my friends, or at least acquantances, thanks to the beauty of social media. Reconnecting is a beautiful thing.

But, being somewhat of a loner–maybe or maybe not by choice–I connect strongly to nostalgic movies and television shows. Stranger Things gave was a whisper into my early memories (I was born the year the first season of Stranger Things began, 1983), but Everything Sucks was a scream and a fist pump.

I didn’t realize how much I miss having a corded telephone on my nightstand. Sounds silly, but I do miss it. And I also didn’t realize how much I (sort of) miss having to actually talk to people on the phone, rather than type things to them. Obviously, I miss other things from my childhood, too. The flannel shirts and ripped jeans (no, the flannels and ripped jeans of today are NOT the same), the soundtrack of Romeo and Juliet, and hanging posters from Teen Beat and Hit Parader on the wall come to mind.

Watching Everything Sucks has made me realize that maybe my childhood wasn’t as odd as I thought while it was actually happening to me. Sure, there were some things that maybe other kids might not have ever had to deal with, but I guess that just makes me an original product. The world hasn’t changed much in twenty or so years, but at the same time, it’s a different world altogether.

A typical Saturday night for me when I was my son’s age was spent writing and drawing in my bedroom. I would lay on my bed with my legs stretched up the wall, ankles crossed, and stare at the ceiling while curling the phone cord around my finger. Chatting away with friends for hours on end was time well spent as far as I’d been concerned. And, obviously it payed off because I cultivated a lot of lifelong friendships at that age.

A night out was different (I think) than what a night out for my kids now is. For one, I lived in a larger area until my first year of high school. So, going out really meant going somewhere, not hanging out in a Dairy Queen parking lot or cruising Wal-Mart or the mall. We did those things, too, but not all the time. We hit clubs, we danced on tables (I’ll tell that tale one day, just not today), we got down and herbal with our bad selves, and we spent entire nights watching the same VHS tape over and over (which took patience because you have to rewind those).

It makes me somewhat sad knowing my kids will never hang out like we did. They won’t live life the way we did. With the popularity of cellphones, everything has changed. I love my phone, too, so I’m not here to tell people to get off my lawn or anything, but the game has changed, and with it, the people too. And the ball, the court, the spectators…nothing is the same.

My kids think I’m probably the lamest mom ever. I don’t think they realize their kids will say the same thing about them one day. But, what my kids don’t realize is that I saw The Foo Fighters during their first tour ever. I was on MTV once (the back of my head was lol), and I used to take great joy in matching my nail polish to my shoes. I wasn’t one of the first, but I was one of the last teenaged girls to paint my nails green knowing I’d carry hell all day at school because that was weird. It wasn’t a popular thing. I wasn’t the first, but I was one of the last to wear a homemade dog collar choker because those weren’t sold in stores (except for actual dogs) at that time, either. Myself and others like me sort of paved the way for today. Just as there were others before my generation, too.

Sidenote–a good friend once said that you can tell what will be popular fashion in fifteen years by looking at what the goths and oddballs are wearing now. Because in fifteen years, it’ll be all the rave with the mainstream kids.

Everything Sucks is pure genius. I really don’t know what else there is to say to try and convince others of my generation to give it a watch. I just wonder if this was what it was like for my folks to watch The Wonder Years. Because, if so, I should apologize for picking on them.